Cancer Taught Me to Live My Best Life 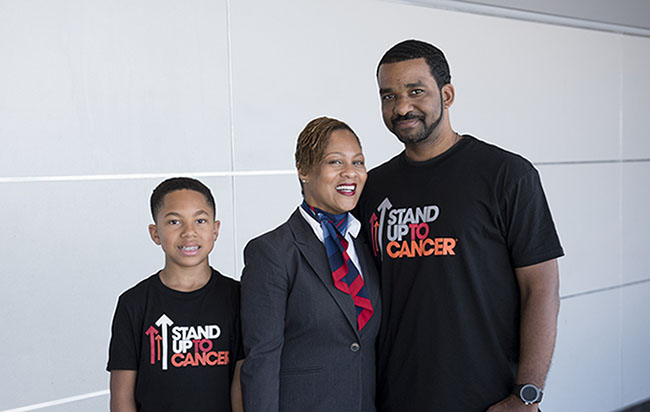 Tamara Wallace Norman describes her journey with breast cancer as something that caused her to become a more authentic version of herself. In 2011, at the age of 40, life seemed perfect, and cancer was the last thing on her mind. Then, in an instant, everything changed. Tamara was diagnosed with breast cancer, something that was discovered as a result of her annual checkup. She remembers feeling blindsided by the news. Treatment quickly followed: six rounds of chemotherapy, six weeks of radiation, and a unilateral mastectomy.

Tamara is quick to share just how grateful she is for the overwhelming amount of support she received. “My husband was my rock through everything, and my little boy was always there, right by my side,” Tamara says. “From my mother, my extended family, to my friends, to my co-workers, I was given support from so many people. It was truly humbling to see how many people found ways to show they cared.”

Tamara was also thankful to work for a company like American Airlines, where she has been a flight attendant for almost 23 years. The compassion and understanding she received from the company allowed her to focus on her health without worrying about her job or finances while she was unable to work.

During treatment and recovery, Tamara embraced her longtime passion for skating as an escape from the disease. “Roller skating was my version of therapy, it transported me to another place and helped me take my mind off cancer,” she says.

Today, Tamara is cancer-free and proudly calls herself a cancer champion. She says her faith, her attitude, her family, her friends and her medical team helped her get through it all. One person, in particular, who made an impact on Tamara’s cancer journey and helped inspire her to be the most authentic version of herself was her father. While Tamara faced breast cancer, her father faced lung cancer. They tackled their diseases together. “My dad and I were always very close; we called ourselves cancer warriors,” Tamara remembers. “He and I used to sit on the phone and talk about being true to ourselves, even when it came to having cancer.” Just before her father passed away, Tamara was pronounced cancer-free. He told her how proud he was of how she handled her disease and what a relief it was to know she was going to be ok. “My dad lived for almost 3.5 years with cancer and never showed defeat. I am thankful I had his support and love when I did. I was proud of him too.”

“I believe that when someone goes through a health crisis or any kind of crisis in life, it can really change you,” Tamara exclaims. “Cancer taught me how having courage, strength, resilience, faith and living your best life can see you through even the toughest times.” Today, Tamara still takes her skates with her whenever she travels for work, making time to skate in all parts of the world. Her blog, Laces and Wheels, documents her life on roller skates with the hope to inspire others to roller skate through life as well.

Tamara is so proud to work for American Airlines, a company that not only places importance on team members’ health, but also one that is committed to funding collaborative cancer research. “We are still losing far too many people to this disease and I’m happy to be part of a company that cares,” she says. “We need more answers in order to help save more lives, and those answers will come with continued research.” In 2017, Tamara had the opportunity to appear in a Stand Up To Cancer campaign alongside actor Bradley Cooper and 60 other American Airlines team members who are survivors, an experience she says she was honored to be a part of.

Tamara continues to Stand Up To Cancer for herself, her father, her Wind River sisters, her cousin Mary, and her co-workers who are currently facing the disease. She shares her story in the hopes that it will inspire others facing the disease to live the best lives they can and keep fighting to survive. “I think when you are faced with something like cancer, talking to someone who has been through it is helpful because they know the ups and downs that come with facing this disease,” she says. “It’s my job to continue to pay it forward and share my journey to help support others facing this disease, just like so many others supported me.”