Julianne Moore announced as Ambassador for the annual campaignNEW YORK, July 8, 2015 /PRNewswire/— Saks Fifth Avenue and the Entertainment Industry Foundation (EIF) announced today that Oscar®-winning actress Julianne Moore has been named ambassador for Saks Fifth Avenue’s 2015 Key To The Cure campaign. For the first time, Saks Fifth Avenue will be teaming up with Stand Up To Cancer (SU2C), a program of the Entertainment Industry Foundation, created to accelerate innovative cancer research through collaboration among leading scientists from different institutions and disciplines who work together to deliver new therapies to patients quickly. By galvanizing the support of the entertainment indus¬try, SU2C creates awareness and builds broad public sup¬port for this effort to combat all types of cancers.

“Everyone has been affected by cancer in some way, whether you’ve known or cared for a loved one facing a cancer diagnosis, or contended with cancer yourself. So I’m honored to work with the Entertainment Industry Foundation and Saks Fifth Avenue to highlight Stand Up To Cancer’s mission to make everyone diagnosed with cancer a survivor,” said Julianne Moore. “I hope everyone will join me in supporting this important cause by purchasing a Key To The Cure T-Shirt.” 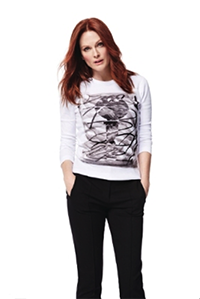 Now in its 17th year, Saks Fifth Avenue’s Key To The Cure campaign has enlisted Jason Wu to design this year’s limited edition T-Shirt, benefiting Stand Up To Cancer (SU2C). Available for purchase beginning on October 1 in Saks Fifth Avenue stores and online at saks.com and saksoff5th.com, the tee will retail for $35, with 100% of sales benefiting Stand Up To Cancer.

“It is an honor to partner with Saks Fifth Avenue on their signature charitable initiative Key To The Cure this year. My hope is that people purchase the limited edition tee, which benefits Stand Up To Cancer, an initiative that has made great strides in cancer research,” said Jason Wu.

Marc Metrick, President of Saks Fifth Avenue, stated, “We look forward to Key To The Cure every October. It’s really great to see our stores, customers and vendors rally together to support such a great cause in raising awareness and funds. We are excited to evolve our Key To The Cure campaign with Stand Up To Cancer this year.”

Julianne Moore will appear in a national public service announcement (PSA) wearing the Jason Wu-designed limited-edition tee. The Key To The Cure PSA will appear in major fashion and lifestyle magazines in September and October. Saks Fifth Avenue’s charity shopping weekend will take place Thursday through Sunday, October 15 to 18, at all Saks Fifth Avenue stores and online at saks.com and saksoff5th.com.

“The Entertainment Industry Foundation is proud to continue to join forces, with Saks Fifth Avenue in our shared mission to fund innovative cancer research that is getting new treatments to the patients who need them quickly,” said Lisa Paulsen, EIF President and CEO and co-founder of Stand Up To Cancer. “We’re so grateful to Saks for this longstanding collaboration, and to every individual who contributes to helping those affected by cancer by purchasing a Key To The Cure T-shirt or shopping at Saks during its charity shopping weekend.”

ABOUT STAND UP TO CANCER
Stand Up To Cancer (SU2C) raises funds to accelerate the pace of research to get new therapies to patients quickly and save lives now. SU2C, a program of the Entertainment Industry Foundation (EIF), a 501(c)(3) charitable organization, was established in 2008 by film and media leaders who utilize the industry’s resources to engage the public in supporting a new, collaborative model of cancer research, and to increase awareness about progress being made in the fight against the disease. As SU2C’s scientific partner, the American Association for Cancer Research (AACR) and a Scientific Advisory Committee led by Nobel Laureate Phillip A. Sharp, Ph.D., conduct rigorous, competitive review processes to identify the best research proposals to recommend for funding, oversee grants administration, and provide expert review of research progress.

Current members of the SU2C Council of Founders and Advisors (CFA) include Katie Couric, Sherry Lansing, Kathleen Lobb, Lisa Paulsen, Rusty Robertson, Sue Schwartz, Pamela Oas Williams, and Ellen Ziffren. The late co-founder Laura Ziskin executive produced the Sept. 5, 2008, and Sept. 10, 2010 Stand Up To Cancer roadblock fundraising telecasts. All current CFA members were producers of the 2012 and 2014 telecasts, with Lisa Paulsen and Pam Williams serving as executive producers in 2014. SU2C was formally launched on May 27, 2008. Sung Poblete, Ph.D., R.N., has served as SU2C’s president and CEO since 2011.

For more information on Stand Up To Cancer, visit http://www.standup2cancer.org

ABOUT THE ENTERTAINMENT INDUSTRY FOUNDATION
The Entertainment Industry Foundation, as a leading charitable organization of the entertainment industry, has distributed hundreds of millions of dollars to support charitable initiatives addressing critical health, education and social issues. For more information, visit www.eifoundation.org.

ABOUT SAKS FIFTH AVENUE
Saks Fifth Avenue, one of the world’s pre-eminent specialty retailers, is renowned for its superlative American and international designer collections, its expertly edited assortment of handbags, shoes, jewelry, cosmetics and gifts, and the first-rate fashion expertise and exemplary client service of its Associates. As part of the Hudson’s Bay Company brand portfolio, Saks operates 39 full-line stores in 22 states, five international licensed stores and saks.com, the company’s online store.