When Kathy Thomas arrived in Tallinn, Estonia, last July, she was celebrating more than reaching her goal of visiting her 100th country. This retired radiology technician and inveterate world-traveler was also marking more than seven years as a metastatic melanoma survivor. 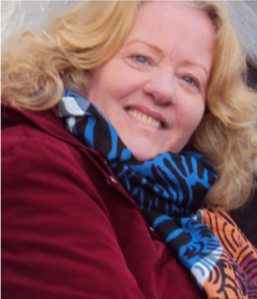 There was a time when the globe-trotting grandma didn’t think she’d make it to her 60th birthday, let alone the 100-country milestone. Promising results early in her treatment would prove short-lived as the tenacious disease would inevitably recur, her hopes constantly lifted then dashed as the melanoma she first discovered in April 2011 eventually spread to breast, liver, and ultimately her brain. By the fall of 2012 her prognosis was bleak.

By the time she entered the clinical trial, Kathy had lost 60 pounds and, with no appetite and no energy, was confined to a wheelchair. By her second treatment with the anti-PD 1 inhibitor pembrolizumab that would later be FDA approved as KEYTRUDA®, she was getting her energy back and gaining weight. And just three months after starting the clinical trial, she was finally able to take that twice-deferred trip to Rio de Janeiro, a destination at the top of her bucket list.

Kathy was featured in the 2014 Stand Up To Cancer fundraising telecast, and earlier this year she appeared as a special guest at the SU2C all-staff retreat, where she shared her inspiring story. For now, she is keeping up with her crochet hobby, continues to spoil her two grandsons, and is planning more world travel. “I didn’t know how long my bucket list would be,” she recently confided, but is thrilled that she is feeling strong enough and optimistic enough to keep adding to the list.